In honor of Hispanic Heritage Month, we’ve created this list of Latine-owned vegan restaurants in LA!

Little Barn Coffee House serves up some of the best breakfast and lunch items in Los Angeles. For starters, they offer a full lineup of coffee drinks—including a PSL. In addition, this Latine-owned vegan cafe features a vast food menu. Hearty breakfast sandwiches, tamales, Reuben sandwiches, pastries—you name it, Little Barn makes it.

Nosh on all the best vegan Mexican street food at El Cocinero Restaurant! From tacos and burritos to nachos, quesadillas, and pozole, each dish is bursting with flavor. Of course, you can’t leave without grabbing a slice of vegan flan for dessert. 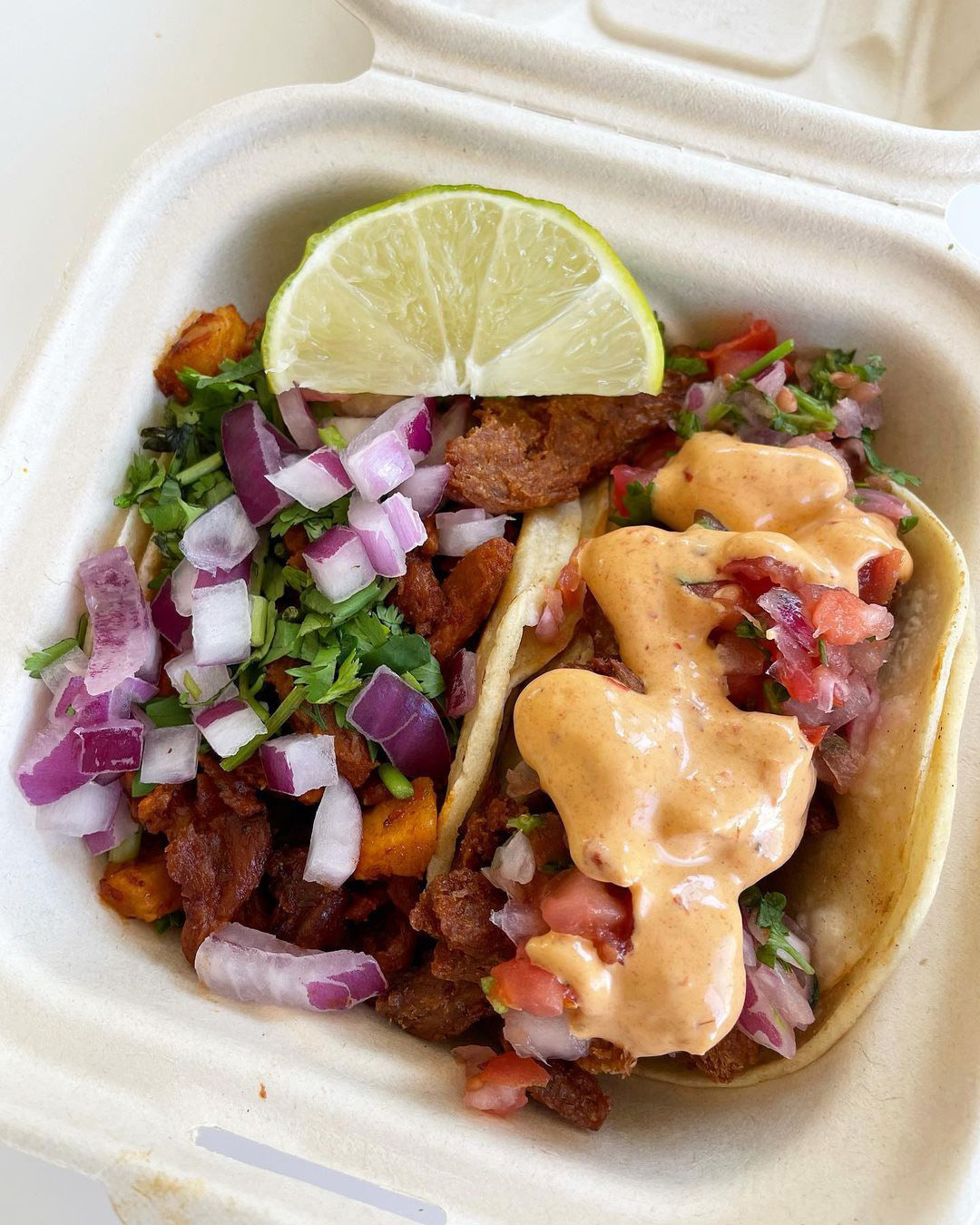 The Grain Cafe is one of the original Latine-owned vegan restaurants in LA! Although The Grain Cafe’s menu covers multiple cuisines, the restaurant is most popular for its vegan Oaxacan food. To be sure you sample a little bit of everything, order the Fiesta Plate. It contains nachos, one chile relleno, two enchiladas (cheese & salsa roja and chicken & mole), beans, and rice. 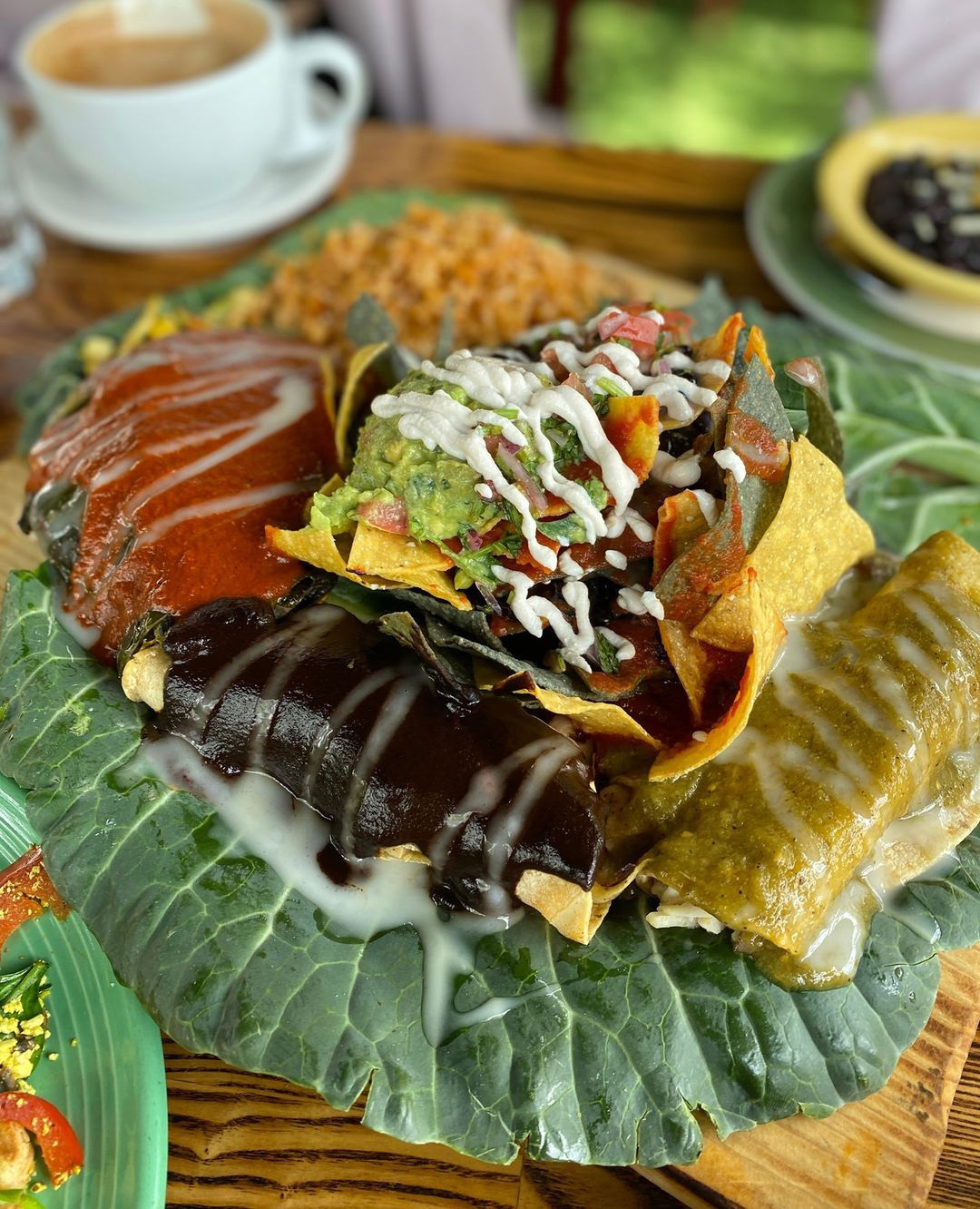 If you’re a longtime vegan, you know all about Cena Vegan. If you’re new here, we’ll give you the rundown. This family-owned vegan Mexican food pop-up brings the community together with delicious eats. You can order nachos, burritos, tacos, and other classics loaded with house-made plant-based meats. Since the holidays are around the corner, keep an eye out for tamales. 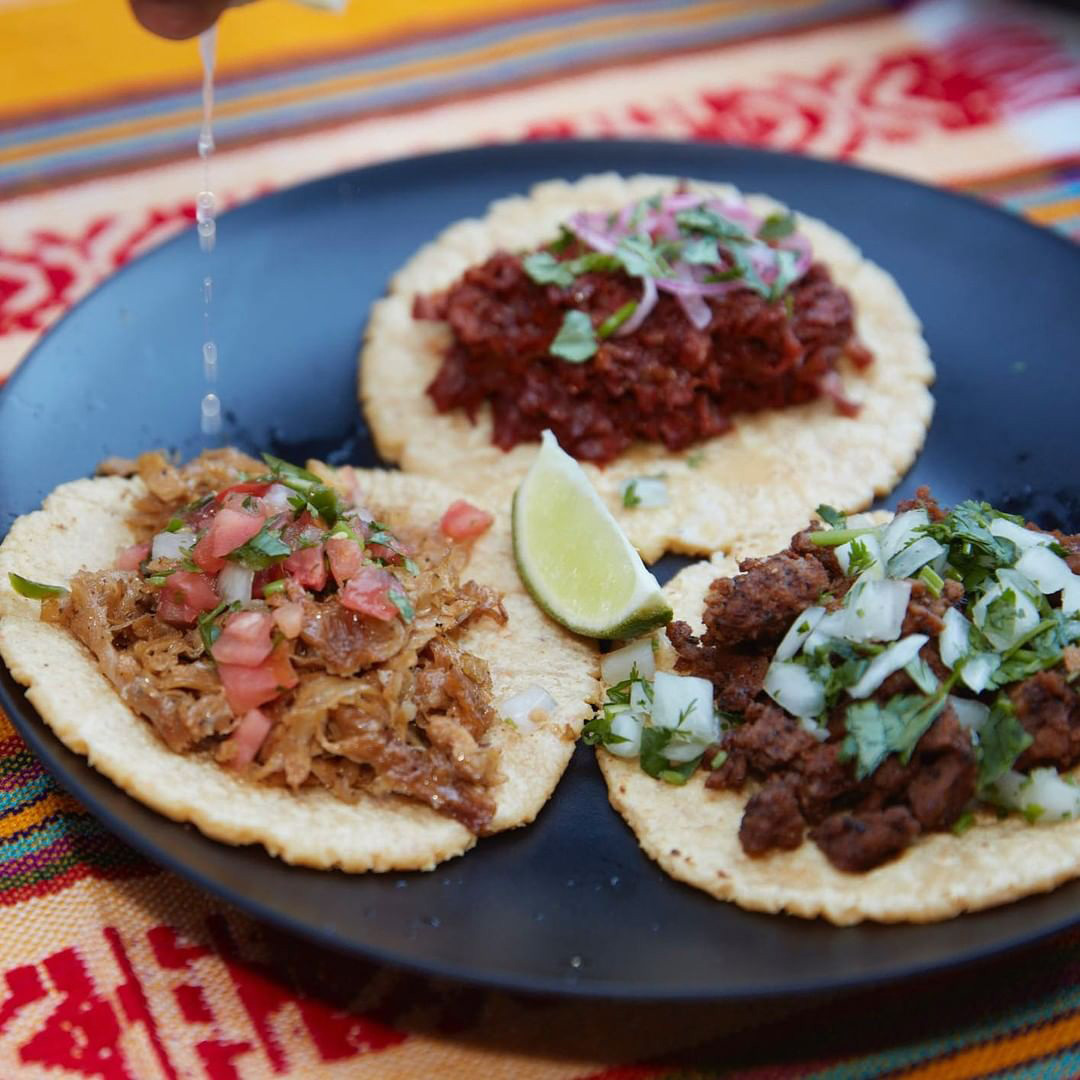 This Latina-owned vegan restaurant veganizes the most iconic Mexican and fast-food dishes. From Veg Outta the Box Tacos and Chilaquiles Tortas to BBQ Bacon Cheeseburgers, there’s something for everyone. But don’t leave without ordering something for dessert! This fall, try Veggie Y Qué’s house-made vegan pumpkin ice cream. 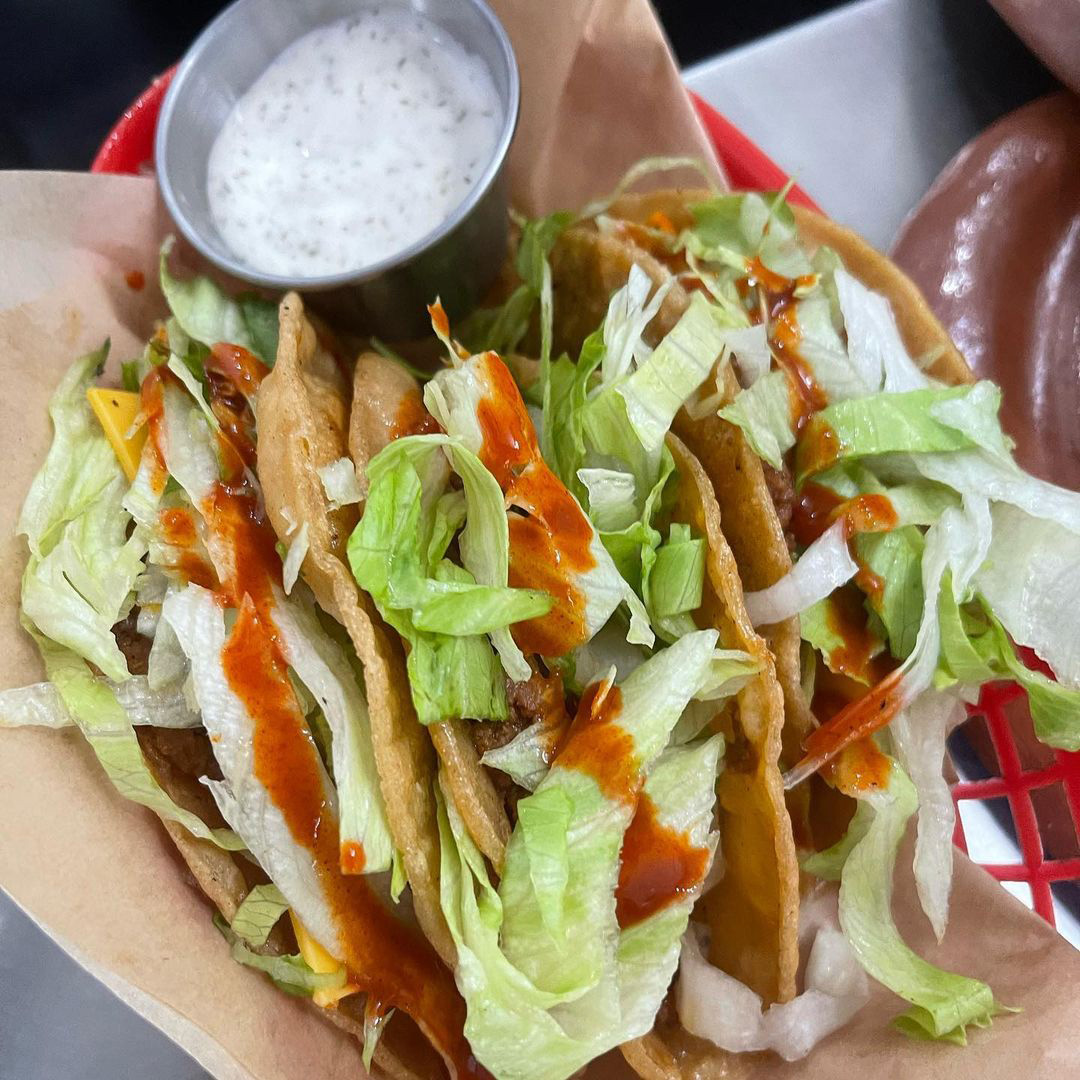 Without a doubt, Vegan Drip Burger crafts some of the juiciest vegan burgers in LA! But that’s not all you’ll find at this new Latina-owned vegan ghost kitchen. Their extensive menu includes loaded fries, fried chicken sandwiches, breakfast burritos, milkshakes, and more. As if you’re not already sold, everything is packaged in compostable materials! Vegan Drip Burger is one of our new favorite Latine-owned vegan restaurants! 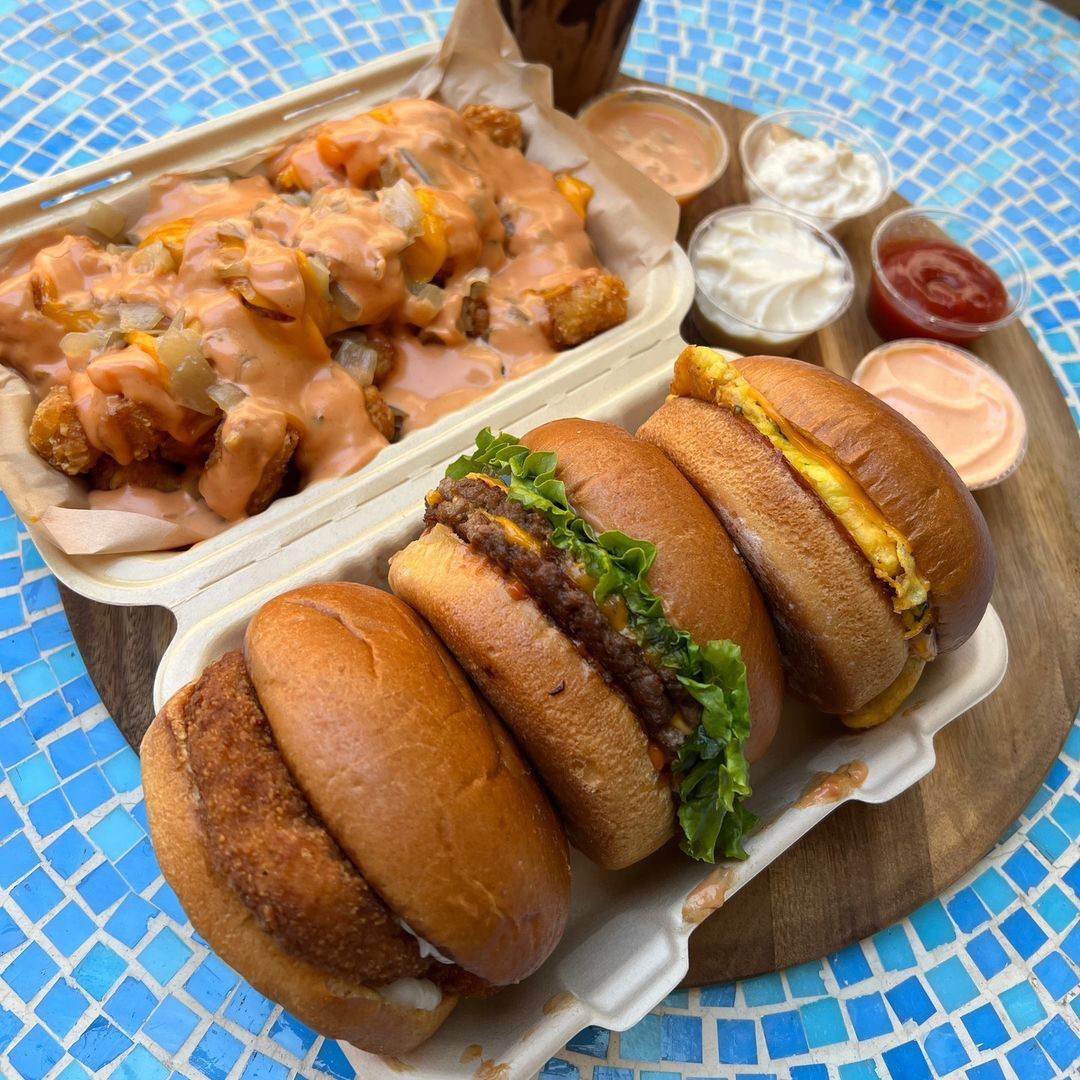 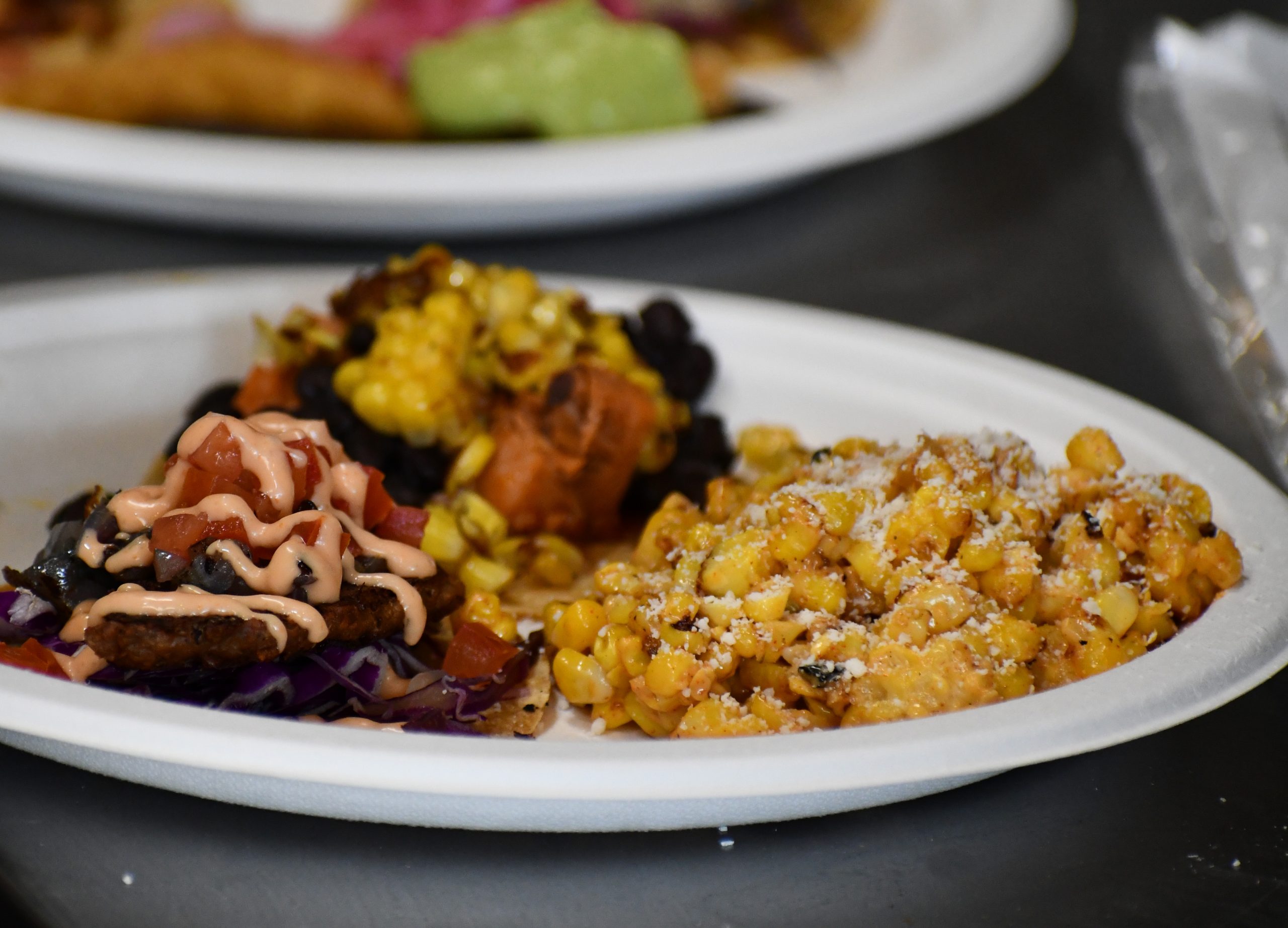 Struggling to find vegan options in Boyle Heights, Desiree Flores launched Dear Mama. The menu is based on traditional recipes from Flores’ grandmother. But this time, the dishes are 100% vegan! Latina- and LGBTQ-owned Dear Mama focuses on providing healthy options to the community. So go show them some love! 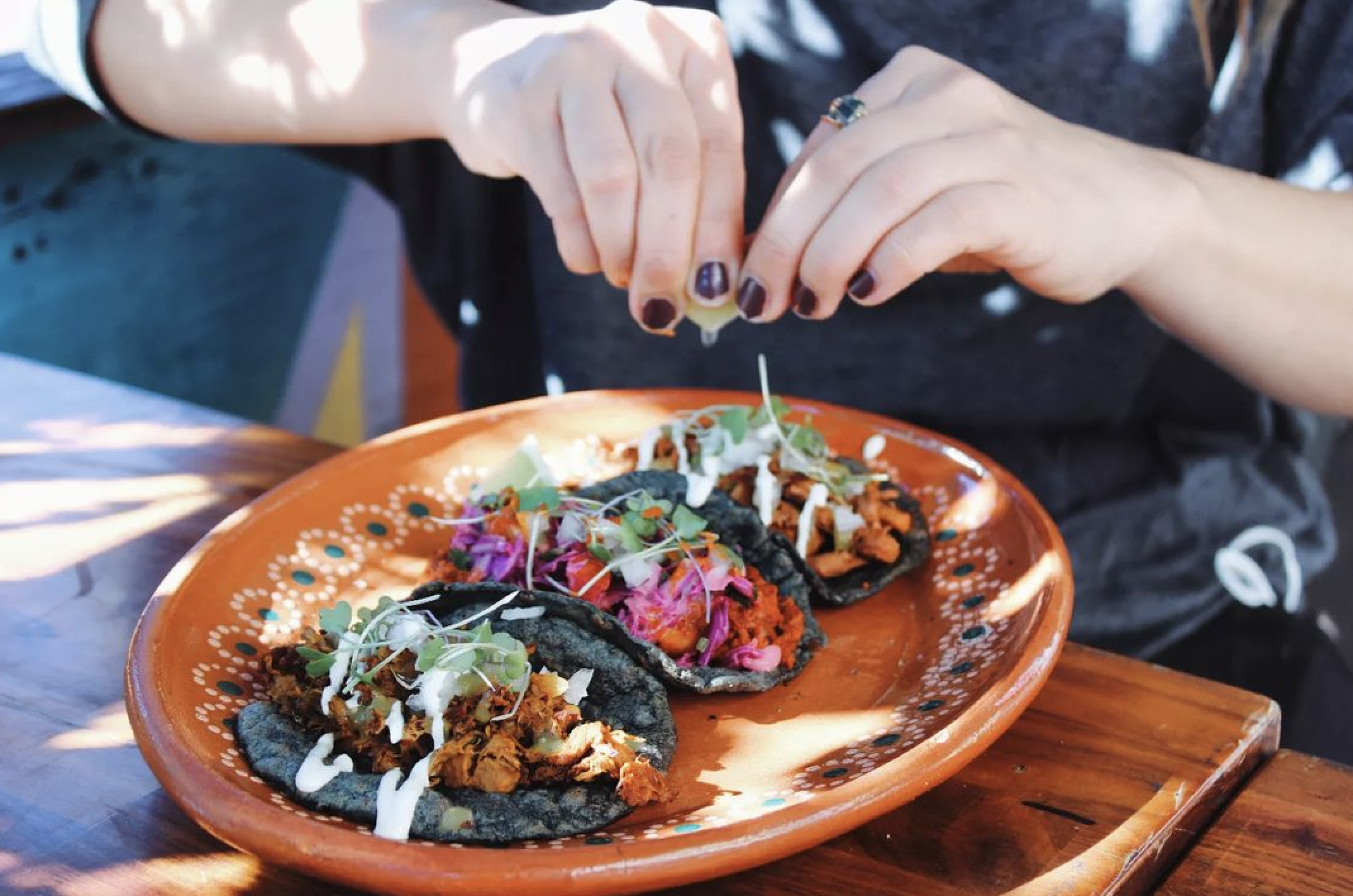 The vegan pan dulce at Soy Concha Bakery is oh-so-nostalgic! Load up your pastry box with Niños Envueltos, Vegansitos, Conchas, Tres Leches, and Flan. Because it’s not every day that you get to load up at a vegan panaderia! 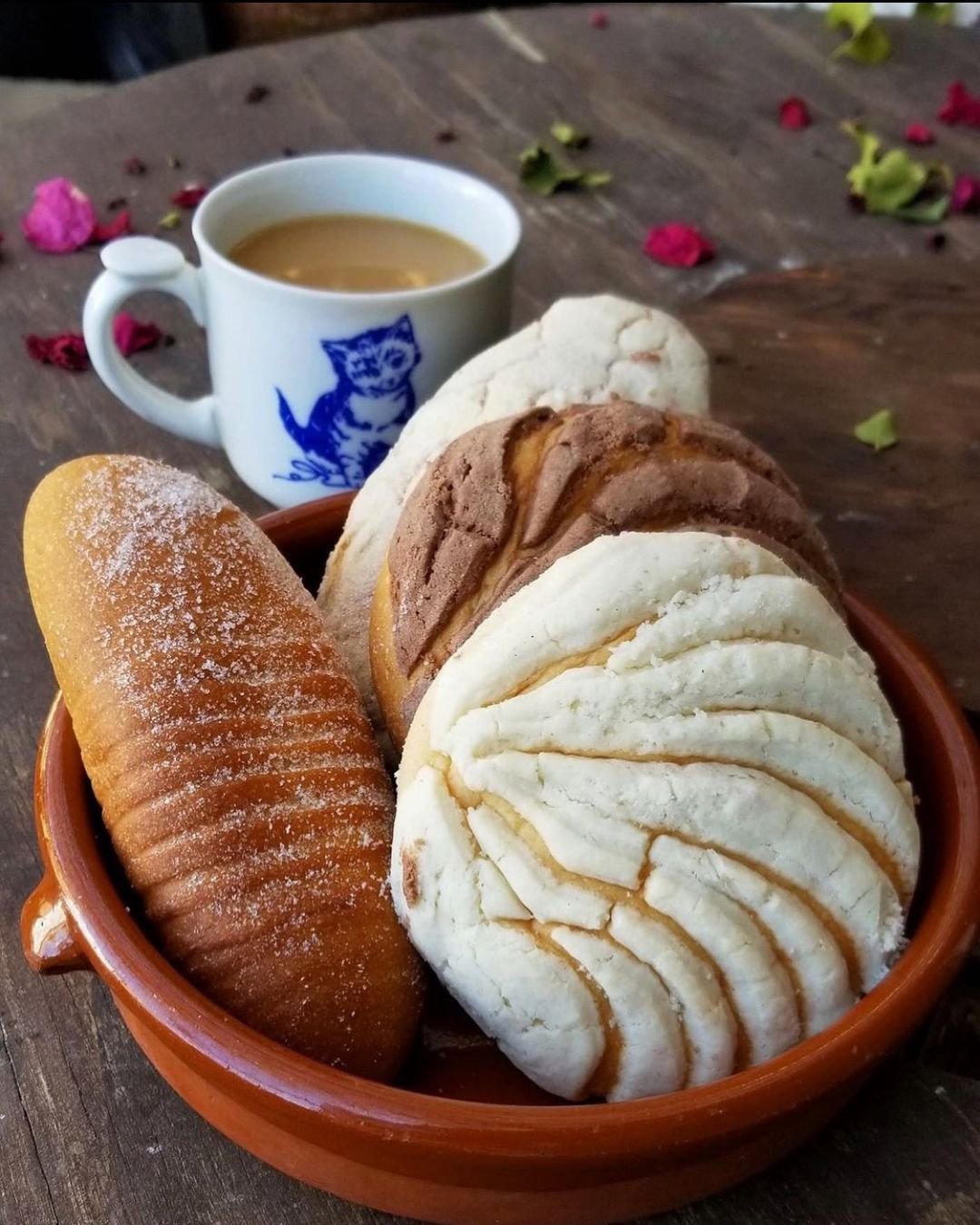 We’re hooked on Vegan JAM’s droolworthy dishes! And if you like authentic Mexican street food, you’ll be hooked too. At any given event, this pop-up serves items like Sopes, Chile Relleno, Soyrizo Empanadas, and Crispy Milanesa Tortas. 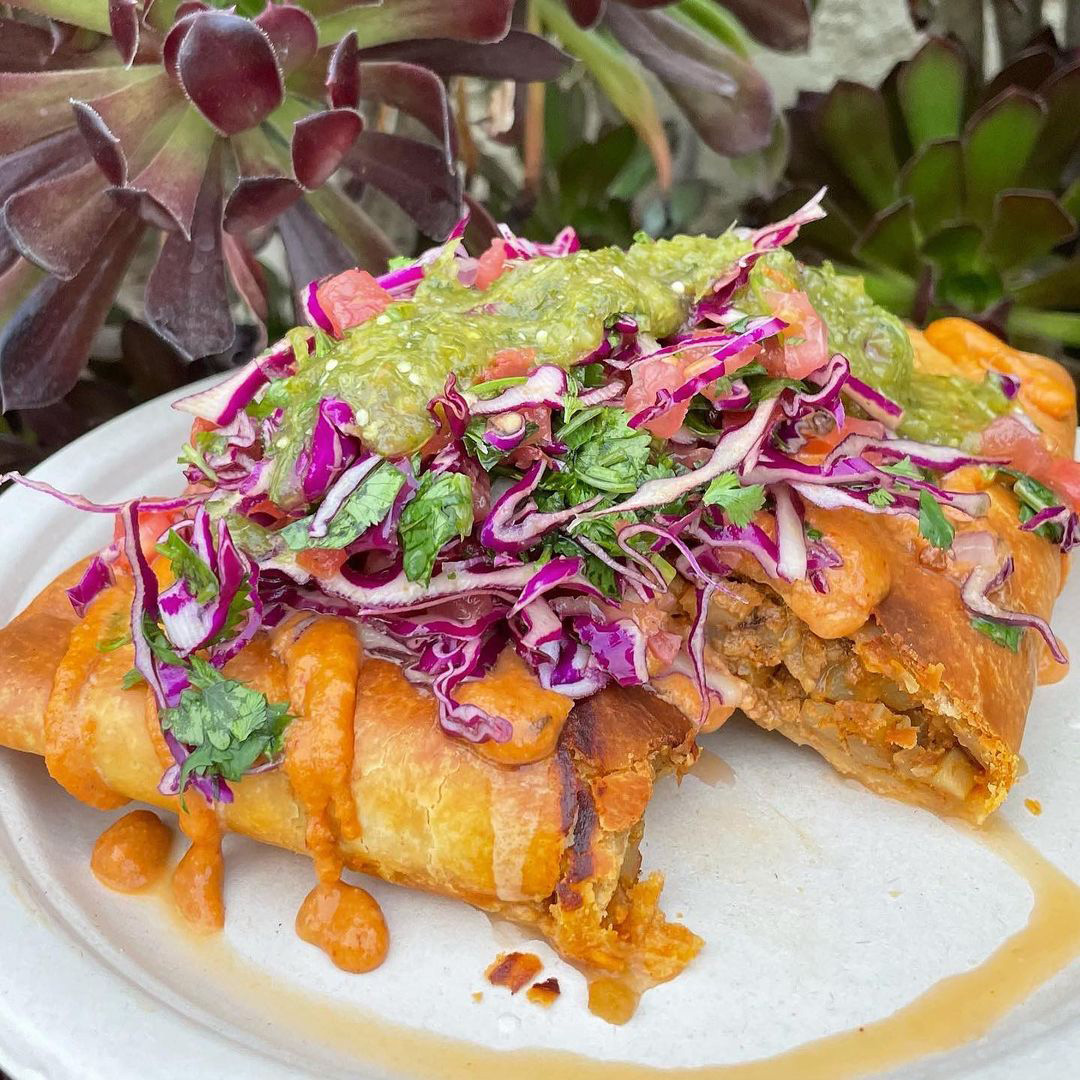 Señoreata took home the win this year on Food Network’s The Great Food Truck Race. On top of that, they’re the first plant-based business to win the show in all 15 seasons. So, make your way to Señoreata’s next event to enjoy the best vegan Cuban food in town! 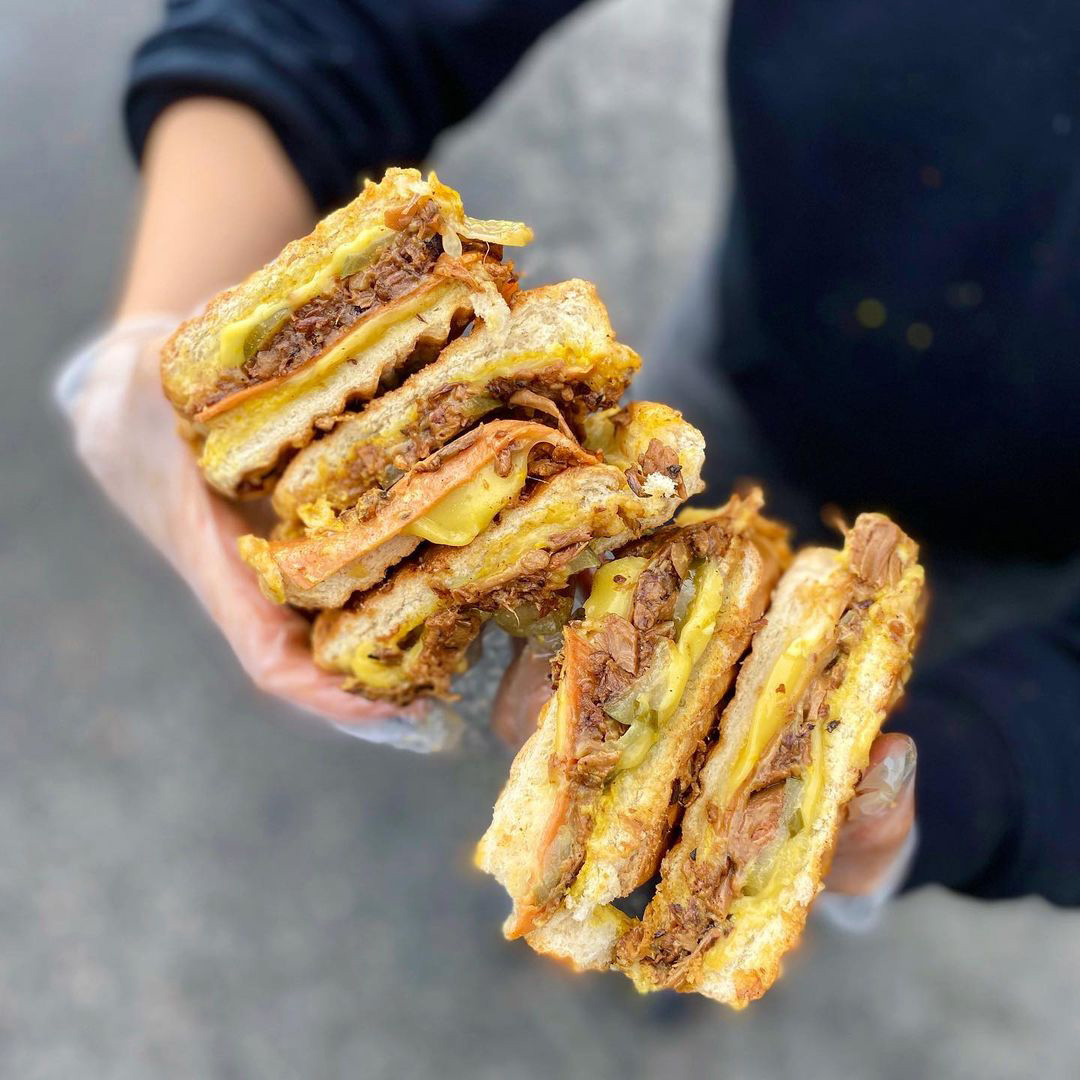 Unleash your wildest foodie dreams at Vegan Hooligans! Whether you go for the Chick-un Melt, Asada Nachos, or BBQ Western Burger, we highly suggest finishing your meal with a vegan milkshake! 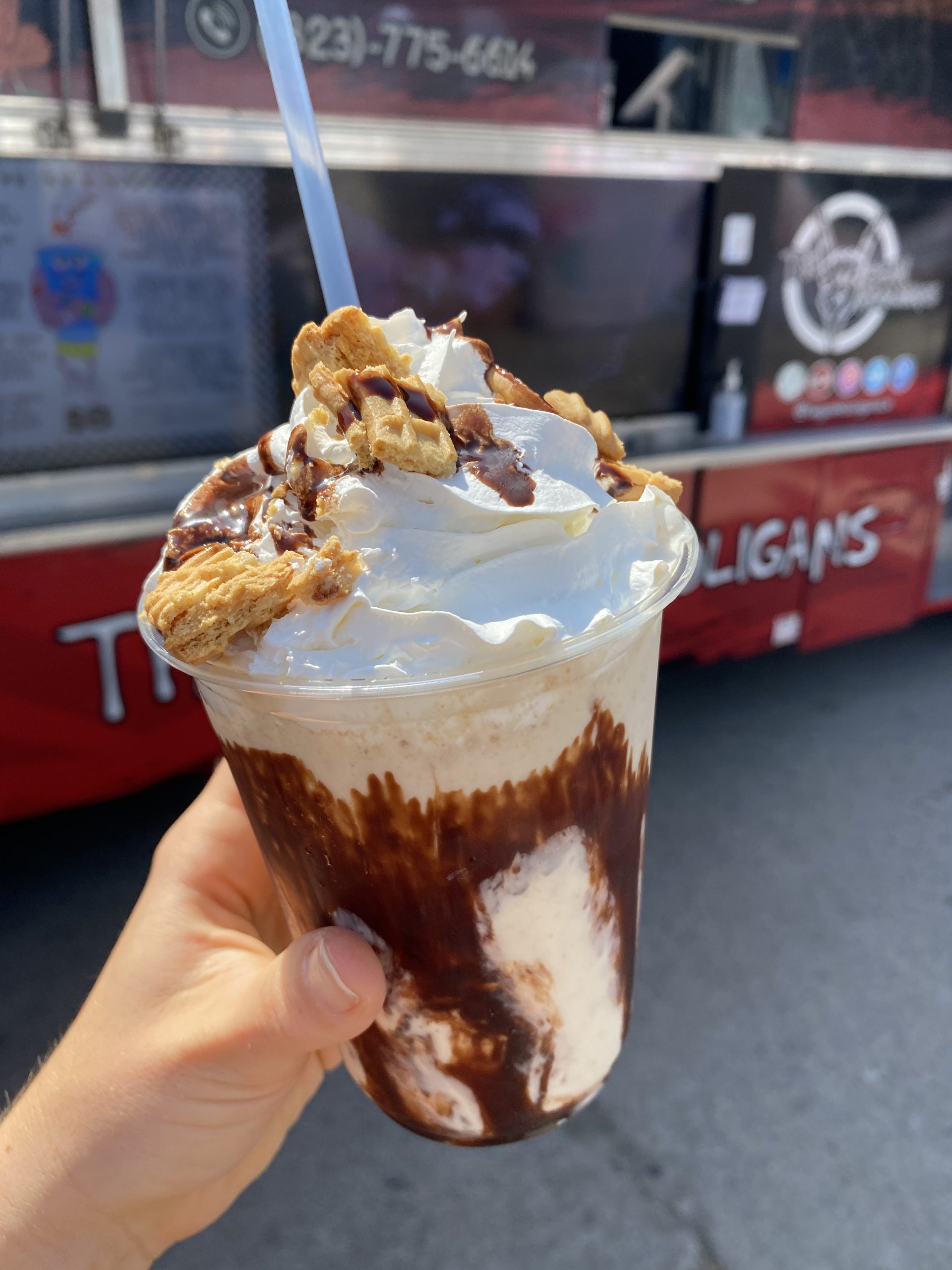 The attention to detail at Alchemy Organica is immaculate! First of all, the cuisine is super unique—ancestral Mesoamerican food with an emphasis on ancient plant wisdom. Secondly, the ingredients are all top of the line. Lastly, the plating is stunning and very nuanced. So, you’ll definitely want to snap a picture before digging in. 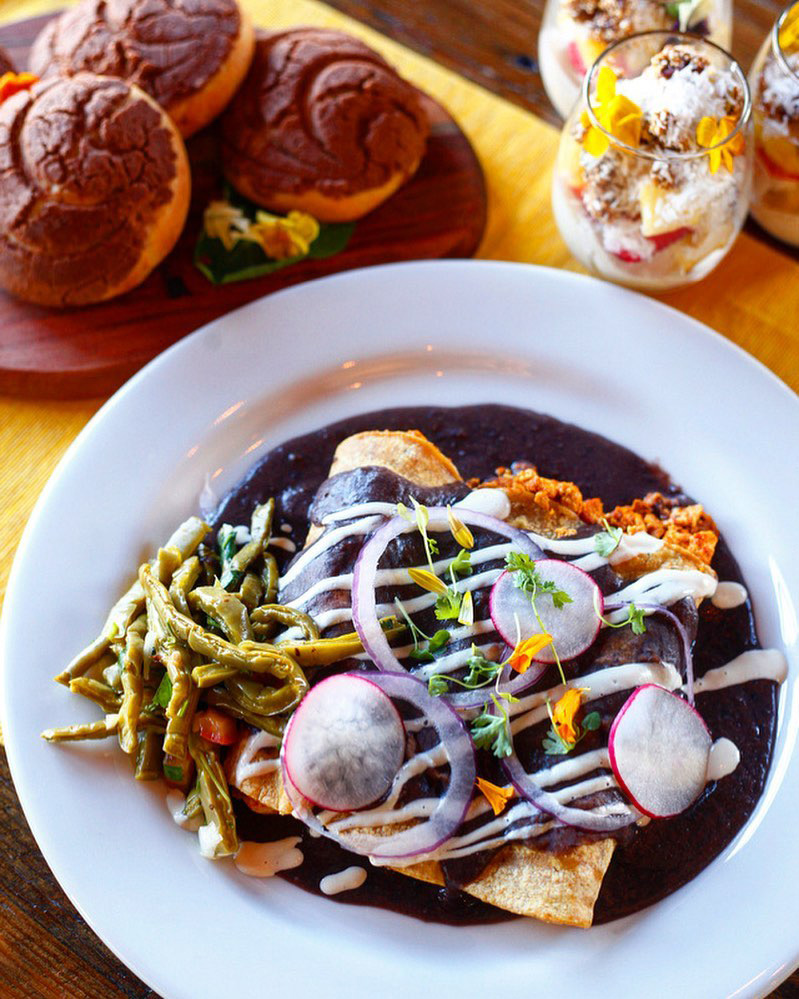 The menu at Másaya is not to be missed! C. Joaquin Flores draws inspiration from his mother’s Mexican recipes and the LA street food scene. The most popular item is their rendition of a street dog in Classic, Fajita, and Slaw varieties. You’d never know you’re eating a carrot in place of the meat. Well, unless we just told you. Shh!

Customers rave about this family-owned bakery. And once you step foot inside, you’ll know why! From savory bolillos and empanadas to sweet Danishes and conchas, Toluca Bakery & Cafe has it all. This includes outstanding service, too! 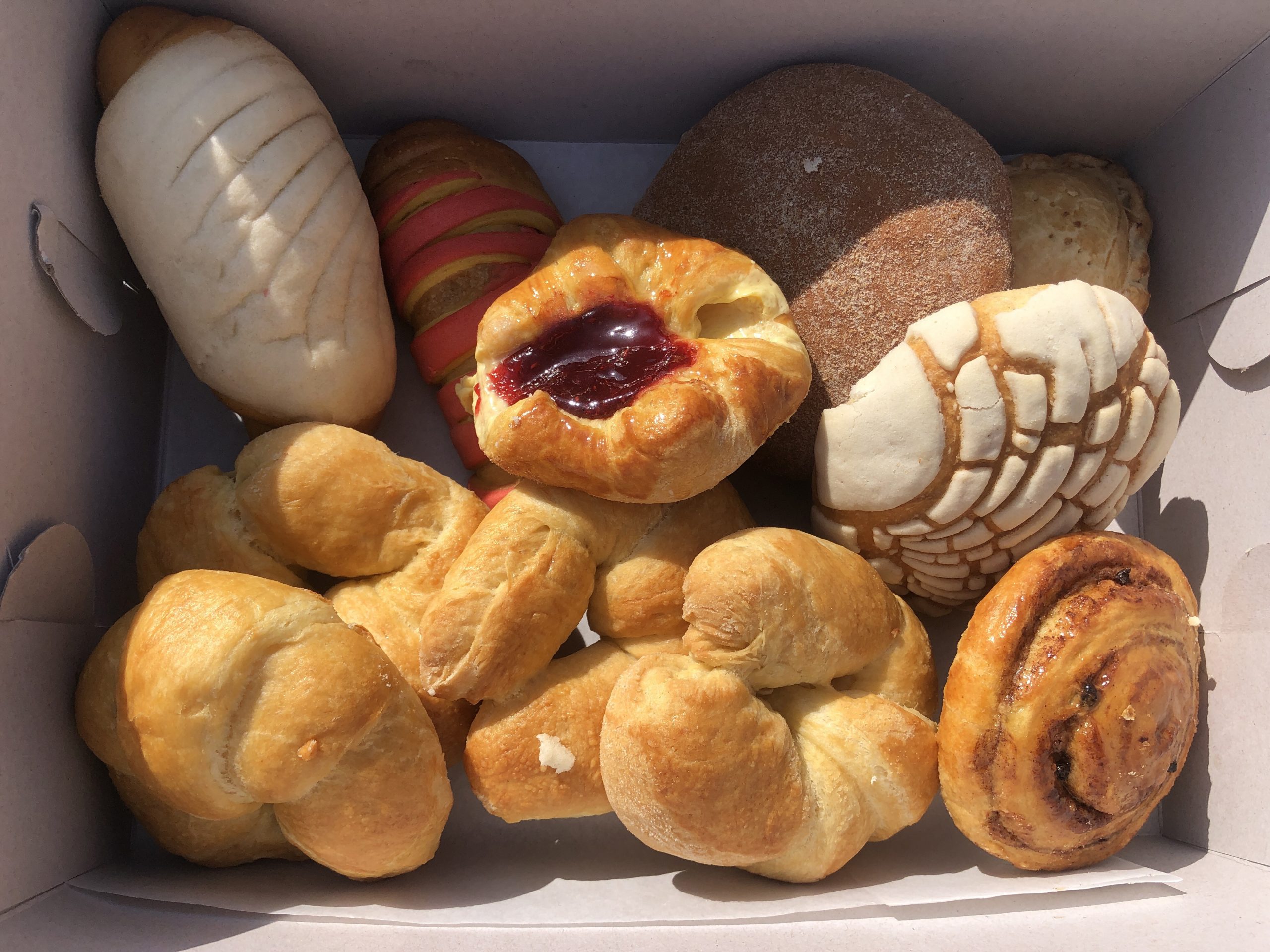 Through his restaurant, Carlos Ortez strives to provide nutritious meals to all Angelenos—no matter their background. To begin, Un Solo Sol is located in Boyle Heights, an area that lacks abundant vegan food. In addition, the menu covers multiple cuisines available at affordable prices. No wonder customers love this place! 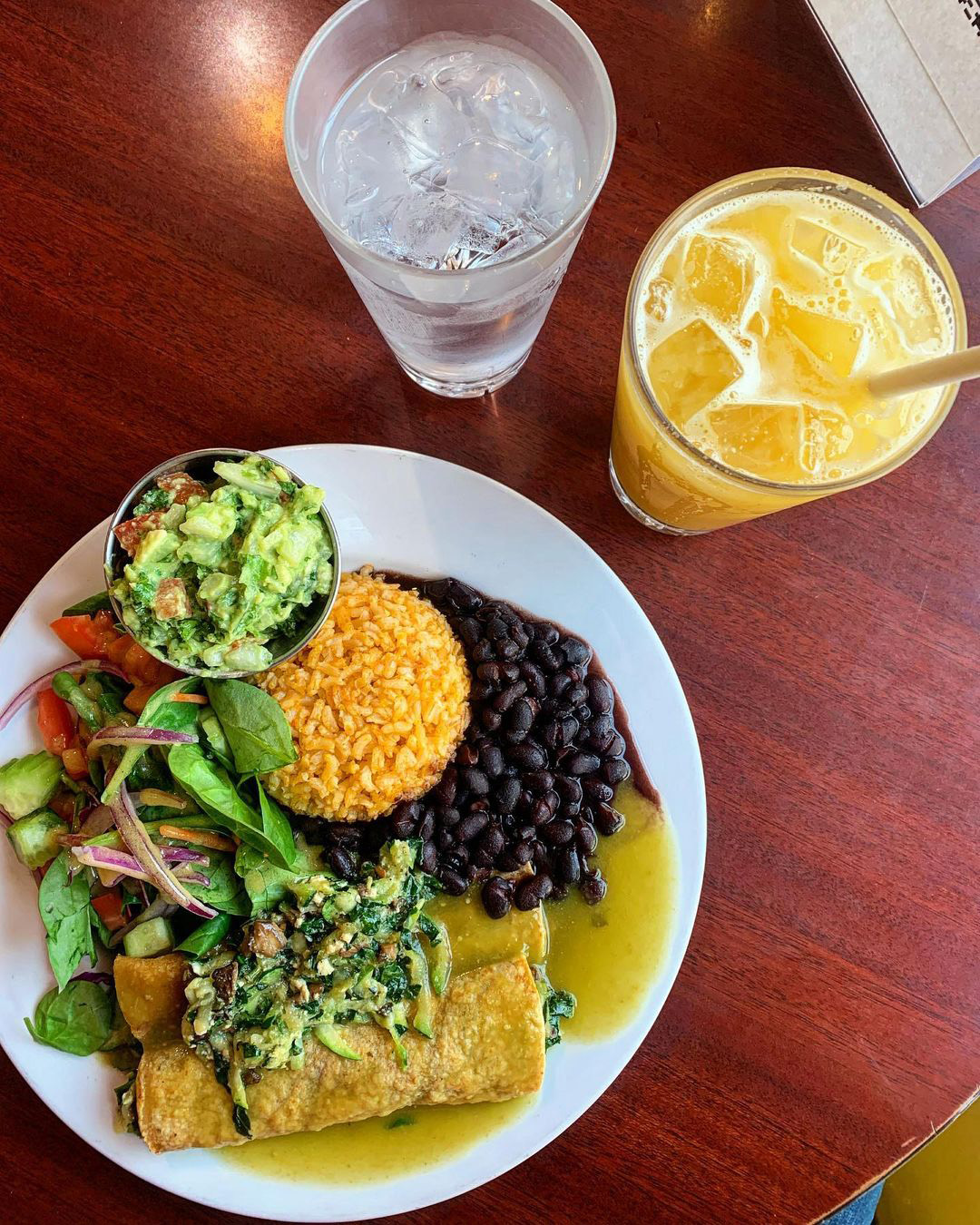 If you have yet to try Mama’s Tamales, that is your homework for the week. Why? Because this locally owned Salvadoran business serves some of the best vegan food in town! Tamales, pupusas, tortas, flan—the list goes on and on. 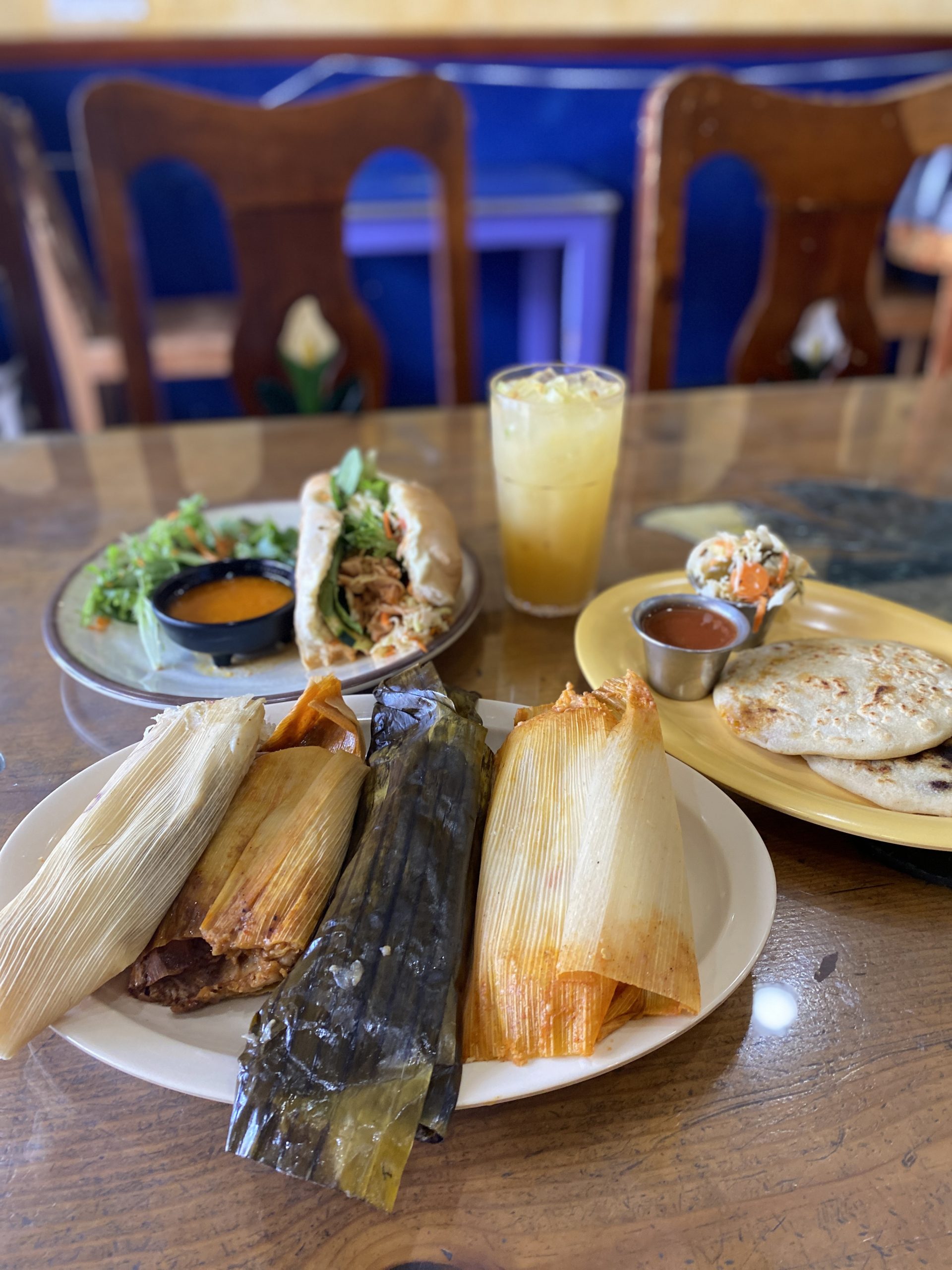